What a GREAT experience! Coach Beth definitely got everyone off the couch with her humor, dedication and enthusiasm. I HIGHLY recommend the Couch to 5K class. You’ll never look at your couch the same way!

I am one of the rare men that took your couch to 5K class about a year ago. Since that time I have run 10 5K races, a 12K race, and just finished an 8K. My times have dropped 15 minutes (off the 5K) and I have lost 15+ pounds. The class was challenging, yet fun. I still talk about “my coach Beth” even though I haven’t taken a class since then. Thanks to you for not only helping me get much healthier, but also learn how to have fun exercising! 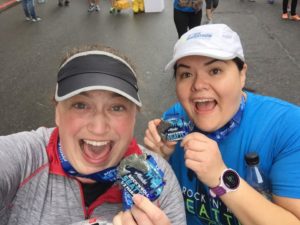 I didn’t run and didn’t know if I could. I took Running Evolution’s Couch to 5K and was so proud of myself for finishing that first half mile, that first mile, leading up to three miles. I signed up for the Half Marathon class, thinking I was crazy for even signing up, but as the miles got longer, the support from the team grew stronger, and I felt more confidence in myself than I have in a long time. I couldn’t believe that I completed my first half marathon literally one year and a week after I started my Couch to 5K class!

Whether you want to be able to run a few miles or a marathon, Beth will get you to your goal with her good-humored encouragement. No matter which class you take you will be proud of yourself (and a bit sad) when it’s over.

I took a couch to 5k class in April 2010 and ended up completing the 2011 Portland Marathon. I didn’t know I could be a “real” runner until I met Beth and the other fabulous women of Running Evolution. In less than two years, I ran farther than I ever thought possible and made incredible friends along the way!